The science is in. climate change will impact the strength of storms. In fact, some models predict that Category 4 and 5 hurricanes in the North Atlantic could become nearly twice as common over the next century as a result of climate change. The appearance of Dorian in 2019 was the fourth straight year in which a Category 5 hurricane formed in the Atlantic, making it the longest streak on record. Hurricane Dorian, which tied for the strongest storm ever recorded in the Atlantic, assaulted the northern islands of The Bahamas with its unbelievable winds – not to mention the storm surge for over 40 hours, making it one of the most costly deadliest disasters to ever hit the archipelagic nation. 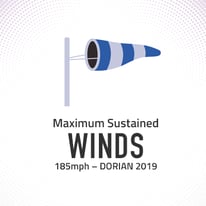 Sadly, climate change is forcing us to accept a new norm of weather patterns. Storms will be stronger, wetter, and slower moving, making the results even more catastrophic for communities.

In addition to plans to preserve life and property, major steps must be taken to reduce the impacts on businesses and increase the resiliency of government functions and infrastructure. Protecting our businesses and public services is one of the first steps to establishing a country resilient to the changing environment. When disaster strikes, communities need employment to help repair and rebuild, so businesses must remain operational or at the very least require less to get their systems back online. Also, of great importance, is citizens’ ability to communicate with their government and access critical municipal groups and emergency information. This requires governments to take new considerations in terms of disaster recovery and the resiliency of their communications and IT infrastructure.

Tech experts agree the cloud has been transformational for the preparation and management of disaster responses. Disasters can knock out or overload local infrastructure, making access to data and communication systems nearly impossible. The cloud works around this challenge as data is stored and kept accessible far from the disaster zone and can be quickly scaled depending on the traffic and volume. According to the Red Cross, World Disasters Report, access to information when disaster strikes, is just as important as food and water and is an increasingly critical need. Working with a cloud provider, governments and business owners can ensure their data and communications are kept up and secure. Data can be backed up and hosted across multiple locations, outside of flood or hurricane zones, making it accessible if one site goes down.